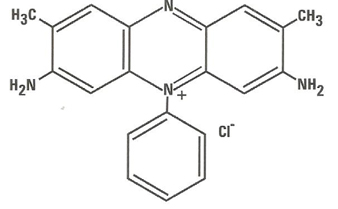 Safranin (also Safranin 0 or basic red 2) is a biological stain used in histology and cytology. Safranin is used as a counterstain in some staining protocols, colouring all cell nuclei red. This is the classic counterstain in a Gram stain. It can also be used for the detection of cartilage, [1]mucin and mast cell granules.

Safranin typically has the chemical structure shown at right which has an added methyl group in the ortho- position of the lower ring essentially identically in biological staining applications,

Safranin is also used as redox indicator in analytical chemistry.

Safranines are the azonium compounds of symmetrical 2,8-dimethyl-3,7-diamino-phenazine. They are obtained by the joint oxidation of one molecule of a para-diamine with two molecules of a primary amine; by the condensation of para-aminoazo compounds with primary amines, and by the action of para-nitrosodialkylanilines with secondary bases such as diphenylmetaphenylenediamine. They are crystalline solids showing a characteristic green metallic lustre; they are readily soluble in water and dye blue or violet. They are strong bases and form stable monacid salts. Their alcoholic solution shows a yellow-red fluorescence.

Phenosafranine is not very stable in the free state; its chloride forms green plates. It can be readily diazotized, and the diazonium salt when boiled with alcohol yields aposafranine or benzene induline, C18H12N3. F. Kehnnann showed that aposafranine could be diazotized in the presence of cold concentrated sulfuric acid, and the diazonium salt on boiling with alcohol yielded phenylphenazonium salts. Aposafranone, C18H12N20, is formed by heating aposafranine with concentrated hydrochloric acid. These three compounds are perhaps to be represented as ortho- or as para-quinones.

The "safranine" of commerce is a ortho-tolusafranine. The first aniline dye-stuff to be prepared on a manufacturing scale was mauveine, which was obtained by Sir William Henry Perkin by heating crude aniline with potassium bichromate and sulfuric acid. Mauveine was converted to parasafranine (1,8-dimethyl Safranine) by Perkin in 1878 by oxidative/reductive loss ofthe 7-N-para-tolyl group.[2]